When film producer Shannon Macintosh approached Boston Light & Sound® (BL&S) to provide 70mm film dailies for Quentin Tarantino’s The Hateful Eight, little did they know this would evolve into the largest project they’d ever tackled: Presenting a movie in the grandeur of 70mm film in 100 theatres across North America.

A reason to return to the theatre

In creating The Hateful Eight, Mr. Tarantino made the artistic decision to shoot his new western in Ultra Panavision 70 — an optical process that had not been used since the 1960s with the release of the epic film Khartoum. In fact, only ten Hollywood movies were ever produced in this ultra-wide format. Film aficionados are anxiously awaiting the film’s release in Ultra Panavision 70, which will be presented in the style of old cinema roadshows, complete with music and an intermission. This extremely high resolution presentation provides a greater sense of space, capturing both the splendor of the mountains of Telluride, CO and the intimate detail of the interior of “Millie’s Haberdashery” where most of the film takes place.

A movie release on a grand scale

The film’s distributor, The Weinstein Company (TWC), charged BL&S to locate and rebuild 120 projection systems for this project. The 70mm film format had become obsolete with the advent of digital audio and digital cinema systems, though a few very limited releases have happened in recent years. “This endeavor is more than the rediscovery of old technology,” said BL&S Co-founder Chapin Cuter. “It’s a project that required big vision, a lot of strategy, and the participation of many people.” The projectors needed for this unique premiere event had been out of manufacture for at least 15 years.

BL&S conducted extensive prep work before working with the 70mm equipment for the project.

BL&S has decades of experience analyzing the mechanical workings of projection systems, optimizing them to get the best performance possible. “For years, we have been working with studios and film directors,” said Larry Shaw, co-founder of Boston Light & Sound. “We know how to make equipment perform to meet their exacting standards. That's one of the key reasons we were well suited to this project.”

Since there weren’t nearly enough working or complete projectors and backup parts in existence for a project of this scope, BL&S:

“It’s been a totally off-the-wall experience,” added Larry. “I’m an engineer and suddenly I’m building parts, and thousands of them at that. We’re used to doing kooky stuff, but this is on a massive scale.”

Wherever possible, BL&S brought back retired projectionists to help set up and operate the equipment in the field. In addition, BL&S employed film festival crews for other locations. And in some cases, existing cinema staff was trained for the run of the film. To support each projectionist in the field, BL&S developed documentation and video tutorials and provided ongoing technical support.

To support the entire distribution operation, BL&S set up a facility in Valencia, CA to assemble the film prints. Individual film rolls were delivered directly from the film lab, Fotokem to the print make up facility. Each complete print of the movie was comprised of 20 individual rolls of 70mm film, which BL&S ultrasonically welded into one complete roll of film for platter operation with no splices.

“In the entertainment industry, the show must go on,” said Shaw. “If something seems impossible, you ignore that and just do it. We dreamed up new techniques, like converting 35mm film platters to 70mm. Nobody said it couldn’t be done — so we went ahead and did it!”

“Even if they said it was impossible, we’d have done it anyhow,” added Cutler. “We love a challenge!”

Installing the equipment was far from a simple task. Many theatres only had room for their existing digital cinema projector, and some required new projection ports. Local electricians had to run new power service for the additional power needs of the projectors. Projector exhaust was another issue. Some theatres had narrow stairways and no elevator, so just getting the equipment into place was difficult. In one case, a theatre had to have a wall opened to the projection booth area and use a forklift to raise an assembled projector up from the lobby.

With less than a week to go, BL&S was advised that the project was short about 60 projection staff to operate the systems. Having foreseen this probability, BL&S had already lined up most of the additional crew needed. With only six days to go before opening, they contracted the necessary staff, arranged for their travel and lodgings, and ensured that they were on-site the day before opening.

“In addition, we had shipped ten complete systems to strategic locations around the country to use as a supply of spare components,” said Cutler. “We had about 18 technical staff also located in key areas to provide technical support should the need arise and to support the projectionists as needed.”

By Christmas Eve, The Hateful Eight was presented on 70mm in 102 theatres across North America — and it looked stunning. “We were delighted to see how well it went,” said Shaw. “We heard later that people thought pulling this off was improbable. That’s exactly the kind of project for us.”

In the end, the 70mm Ultra Panavision 70 release of The Hateful Eight accounted for a significant percentage of the total domestic gross for the picture. In many cases, patrons asked specifically for the 70mm presentation; this release was a very special event, maybe even a once in a lifetime opportunity to see analog film presentation at its very best.

“This project is a culmination of my 50-year career, bringing it together into one massive project,” Cutler said. “We’ve come full circle. My first job was at a movie theatre in 1964 where I ran My Fair Lady as a 70mm roadshow engagement. The Hateful Eight has allowed us to go back and in some ways reinvent the craft that we were trained into early in our careers. We are very proud and blessed for this experience and the hundreds of people who supported us in this endeavor.”

Watch one projectionist’s timelapse view of The Hateful Eight roadshow from the booth. Andrew Walker notes, “I was lucky enough to be one of the projectionists to work on the 70mm roadshow for The Hateful Eight and this is what I captured during the 59 showings the film over the course of 15 days. The whole thing was quite an experience and it made me appreciate film all over again. Shot with a Nikon D810 using the Kessler TLS system and a Second Shooter.”

70MM of Hateful from Andrew Walker on Vimeo.

Check out a selection of the press for BL&S and The Hateful Eight premiere below. Find more news on blsi.com.

“35mm Isn't Dead Yet…” on Leonard Maltin’s blog at Indiewire.com. 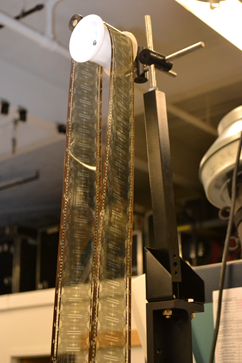 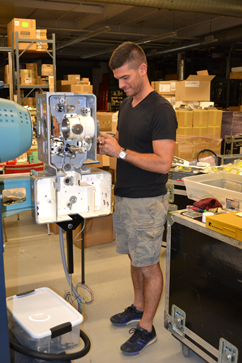 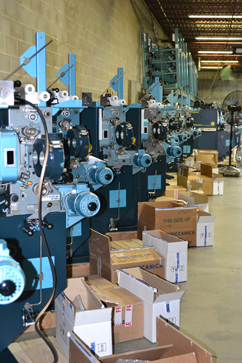